It wasn't until I began itinerating that I became aware of how many couples are unable to have children of their own.   Many of these couples have been trying for years, and some have become settled in their hearts and are now the happy parents of adopted children.


However, others have become despairing.  My heart goes out to these ones and it is not uncommon for several to approach me during meetings for prayer for healing from barrenness.  This young Korean couple had been married for 7 years and trying to start a family from the beginning of their marriage.  In 2011, on the second day of meetings in Seoul,  they came to me, highly discouraged and asked for prayer.

A year later, I was in the same city and a young couple rushed over to me holding a beautiful 3 month old baby.  This is their testimony:

Three months after the prayer, the young woman went to her Doctor to discover  that she was, indeed, pregnant.  During the examination, her Doctor also determined that the date of conception was most likely the second day of the conference! 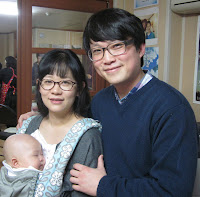 "He settles the childless woman in her home as a happy mother of children. Praise the Lord."  Psalm 113:19


Just look at the smiles on their faces and the contentment of the baby!


Thank you Jesus for making this couple settled and happy in their home!!