God is on the Move in Ghana! 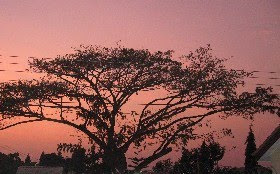 Ghana had been on my heart since my first visit in 2009, and I was pleased to receive an invitation from Rick and Donna Whitcomb to return to Ghana in January of 2010. I was also looking forward to meeting Prince, a handsome young 11 year old who we have recently introduced into our family. I was excited to bring with me my grandson’s very special soccer ball as well as an Olympic ‘Believe’ t-shirt and cap – some simple gifts for this young man who has had so much to overcome in his short lifetime.
After a lengthy security check and double check of passports and visa permits I was relieved to see the familiar face of Tom Newell, who operates a private guest house in Accra. I actually enjoyed the bumpy ride on the red dirt road to the guest house, knowing that after 26 hours of travel I would soon be able to enjoy a sleep in the air conditioned guest room! The next morning I awoke to an extreme thunder storm and shortly after a five hour power outage.
Our first meeting was attended by about 400 people and we taught on the love of the Father and encouraged people to step into His love….what an absolutely awesome evening. 90% of the attendees came forward and several were so overcome by the Spirit that they had to be carried out. But the sweetest thing was to see over eighty children from Agape Children’s home totally overwhelmed by the Presence of Holy Spirit.

Ps 68:5-6 A father to the fatherless, a defender of widows, is God in his holy dwelling. God sets the lonely in families, he leads forth the prisoners with singing. NIV

Agape Gospel Mission Church is a growing congregation of about 800 people, and the plan was to hold four evening meetings, from 6:30 to 10:00pm. Every night the people arrived and the Lord was so faithful as Jesus touched and healed so many people. On one of the nights I had a word of knowledge that a man would be at the meeting that wanted salvation. As I came up to the platform I mentioned this and immediately a young man of 25 years came forward. And then another young man came and received Christ. The faith in the house sky-rocked and that night many were healed. The days flew by as the mid days were filled with going to different hospitals in the city praying for people, meeting new friends, some shopping and on three afternoons I met with the pastoral team to debrief how things went the night before. They had a blast ministering to the many. This was a first time experience for the pastors to do a team ministry prayer team at a big meeting and the faith continued to rise. One evening gold started showing up on people’s hands and shoulders. There were three ladies standing about 12 feet away from me and when I asked who had gold on
their hands , these ladies looked at their hands and then as they waved to acknowledge the gold they simultaneously screamed out and fell to the floor and were delivered. It was like as if they actually saw the glory of the Lord on their body the demons had to leave. It was amazing and we ended with an incredible time of worship.
On Sunday I had the privilege of preaching back to back services with over 800 in attendance. The worship was intense, moving and joyful and touched me deeply. I joined in with the dancing and shouts of joy, handkerchief waving and shouts of praise – what a powerful experience!
How wonderful to see what I believe is a church on the verge of revival and I was so blessed to be a small part of the outpouring!
Africa