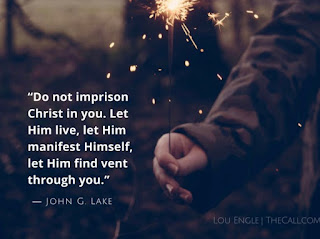 It was October 24th, 2017 and Gord and I were on the last leg of a four-week ministry tour of New Zealand, Australia and Tasmania. The schedule had been very hectic and I was feeling quite depleted and in need of some 'alone time' with Jesus.  I poured myself a coffee, plumped up some cushions on the  sofa and began to review our ministry time "down under'.  So many leaders passionate for more of Jesus, so much prophetic, so many healed, incredible times of extended worship, and yet most prominent in my thoughts were those who were not healed or touched.  My thoughts went from there to others I was praying for back home, fully believing for a miracle and yet seeing little movement.  It's interesting how quickly one can slide down the slippery slope of unbelief when we stop taking our thoughts  captive. I thought about the ground being lost to addictions, to perversions, to greed,  to hatred, to violence, and I must have spoken out loud the erroneous conclusion that I had come to: “we are losing the battle - the enemy is unstoppable!”

"2 Corinthians 10:5 (NIV) We demolish arguments and every pretension that sets itself up against the knowledge of God, and we take captive every thought to make it obedient to Christ."

I KNEW it was the Lord and I was absolutely undone at the strength of His rebuke. Almost immediately I was taken into a vision, where I saw Him galloping at breakneck speed, on a most glorious white horse, so beautiful, that I could not have even have imagined. The horse was totally focused with ears forward and I knew he was at full gallop because of the steam coming from his nostrils. I did not see the face of the Lord, but only an enormous sword at His side. I did not see any words on the sword, but knew that He was coming with Righteous Anger,  Mercy and Justice.

"Revelation 19: 11 - 16 (NKJ) Now I saw heaven opened, and behold, a white horse.  And He who sat on him was called Faithful and True, and in righteousness He judges and makes war."

Then I heard again in my spirit, FINALLY!

The vision continued and I saw Him riding into places where wickedness and sin had achieved permanent acceptance and I saw Him turning the tables upside down, exposing the most vile of sin(s). These tables were entrenched in some churches, in education, in government, in media, in medicine, in science, in sports and in finance and I sensed  that the exposure of corruption in these places would  gain momentum very quickly with devastating repercussions.

"2nd Timothy 3: 1 - 5 (KJV) This know also, that in the last days perilous times shall come.  For men shall be lovers of their own selves, covetous, boasters, proud, blasphemers, disobedient to parents, unthankful, unholy, without natural affection, truce breakers, false accusers, incontinent, fierce, despisers of those that are good, traitors, heady, high minded, lovers of pleasures more than lovers of God: having a form of godliness, but denying the power thereof: from such turn away."

I was now really frightened as I was imagining these things happening through the eyes of an unbeliever.  I can  only explain what happened next as ‘a stem cell transplant in my spirit!’ (A procedure in which a patient receives healthy blood-forming cells (stem cells) to replace their own that have been destroyed by disease)

Resting in what was happening, I could feel all discouragement, all fear, and all exhaustion (damaged or infected spiritual tissue) dissipate as I received a fresh deposit of courage, purpose and focus.  Just knowing without a doubt that HE IS UNSTOPPABLE changes everything for me, the way I live and love, the way I interpret the signs of the times, and especially the way I pray!  There is no doubt in my mind, none at all, that I  heard the voice of the Lord whether just for me or for others, I do not know.  However in the past three months, I have come across so many confirming prophetic words that I am comfortable in now sharing this.   "Yes Lord"!

"Will You Ride" - Andy Park

"I have long said that, in spite of the hyper-grace distortions so many have bought into, holiness matters today perhaps more than ever in my lifetime. We are living in a day of exposure. It’s not that God is angry so much as it is that He is about to do some incredible things and there must be a clean and solid foundation on which to build it. Every crack will be exposed. Every unclean thing will be revealed. It’s time to live like the saints Jesus has made us to be. Take what I’m saying as both a warning and a wonderful promise.

Luke 12:2 “But there is nothing covered up that will not be revealed, and hidden that will not be known. Accordingly, whatever you have said in the dark will be heard in the light, and what you have whispered in the inner rooms will be proclaimed upon the housetops." (December 20th, 2017)

Update from Jan: April, 2018:  Recently, I woke up with the alarming thought that I was at risk of loosing the confidence He had deposited in my spirit that glorious October morning.  My first response was simply to shake it off, as coming from the enemy, but I needed confirmation from the Lord that it was not from Him.  That afternoon I went shopping at Costco.    Imagine my surprise when I reached for a 5 pack of deodorant only to find this: 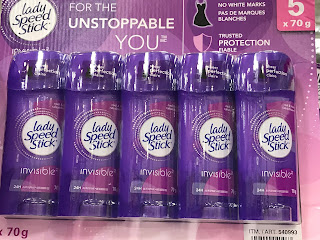 "Psalm 62:11 Once God has spoken; twice I have heard this: that power belongs to God!"