On the day of Pentecost, seven weeks after the resurrection of Jesus, Holy Spirit was poured out upon those followers of Jesus who had gathered together in Jerusalem. What happened on the first Pentecost continues to happen to Christians throughout the world today, though usually not in such a dramatic fashion. However, as we approach the end of an age, we are seeing and hearing more and more outpourings!

According to Acts 2, when the day of Pentecost came, they were all together in one place. Suddenly a sound like the blowing of a violent wind came from heaven and filled the whole house where they were sitting. They saw what seemed to be tongues of fire that separated and came to rest on each of them. All of them were filled with the Holy Spirit and began to speak in other tongues as the Spirit enabled them.

Gord and I were part of a team who established a conservative church in Kelowna in 1986.  But it wasn’t until an Elder’s Christmas party in 1988 that we were introduced to the Fire of God - both a frightening and awesome experience!  Without invitation, Holy Spirit invaded our home (where we were gathered)  like a rushing wind, resting on each one there, depositing gifts of prophecy, discerning of spirits, tongues, word of knowledge, teaching, preaching, healing, evangelism, intercession and removing any and all of our disbelief in a five hour visitation.   To an outside observer, we would most certainly have appeared being drunk with wine, however, we were in fact, totally and absolutely overcome by Holy Spirit!

Later on in Acts 2, we are told Peter stood up with the Eleven, raised his voice and addressed the crowd: “Fellow Jews and all of you who live in Jerusalem, let me explain this to you; listen carefully to what I say. These people are not drunk, as you suppose. It’s only nine in the morning! No, this is what was spoken by the prophet Joel: ‘In the last days, God says, I will pour out my Spirit on all people. Your sons and daughters will prophesy, your young men will see visions, your old men will dream dreams. Even on my servants, both men and women, I will pour out my Spirit in those days, and they will prophesy.

This was a momentous event. For the first time in history, God began to do what he had promised through Joel, empowering all different sorts of people for ministry. In the era of the Old Testament, the Spirit was poured out almost exclusively on prophets, priests, and kings, in the age of the New Testament, the Spirit would be given to “all people.” All would be empowered to minister regardless of their gender, age, or social position.

Unlike the 120 in the upper room, we were not at all prepared for this visitation but none-the-less God poured out on each of us generously and continued to over the next months and years. I have often reflected on that time in our history and wondered why us?  Why then?  And what was the lasting fruit?  But then I realize that when God speaks, He always fulfills His prophecy.  Outpourings were and continue to be fulfillment of the prophecy spoken by the prophet Joel. And when God moves upon His people with His power, it is for the purpose of accomplishing His Divine will. 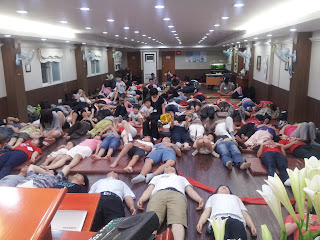 I continue to be astounded and thoroughly excited at the way in which God is pouring out His love and power on the people of S. Korea and I can only say “more Lord”.  Night after night, Gord is sending me reports of miracles, healings, deliverances, visions, prophecy, and yes....drunkenness! The Pentecost experience is truly a blue print for authentic church growth, already understood by many in underground churches around the world.  My prayer for every soul experiencing this outpouring in South Korea is that they will take hold of this blue print and run with it!  To quote a famous evangelist, when we are anointed with His Power, it is to do His will....for indeed we become Power assisted!
Enjoying vicariously.....Jan