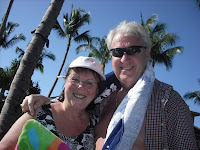 Jan and I had just completed a week of teaching at the Youth with a Mission Base (University of the Nations) in Kona Hawaii. We decided to take a walk along the beautiful white sand of the nearby beach. After a good brisk walk we  sat and relaxed for a while on the warm powder-like sand, watching wave after wave of sparkling lights from the sun dancing on the water. As I sat there, I heard the Lord speak to me. He said, “I am closing the doors of Kona for a season.”

Then he spoke to me about some of the complicated issues that YWAM Kona would be facing in the months ahead and because of these difficulties, the Crossroads School would be cancelled, as the Base would require a time of transition and change. I shared this news with Jan and she and I were both somewhat disappointed, as we love Kona, and so enjoyed teaching in the Crossroad Schools.

We both went back to sunbathing, and within a few minutes the Lord spoke to me again. He said, “I am closing the doors to Hawaii, but I am opening the doors to South Korea.” I was surprised to hear this, as I had no relationships with Koreans at that time, and I didn’t know of any Korean churches. I had been to Seoul once before, in 1987, but only for eight hours on a layover to Japan. I told Jan what I had just heard. She also thought it improbable, as we didn’t have any connections in Korea. We agreed to just leave it and see what happened. We walked back to our guest room and started to get showered and dressed for dinner. After about fifteen minutes I heard a knock at the door.

When I opened the door, in front of me stood a Korean woman. She said, “Are you Gord Whyte?” I replied, “Yes,” wondering what she wanted, having never met her before. She said, “I would like to invite you to come to Korea to teach at one of the YWAM schools in Seoul.” I was shocked, to say the least. This was the confirmation of the word of the Lord that I had received just a half hour earlier. I invited the woman in and explained how the Lord had just spoken to me of this opportunity, and we checked the calendar to confirm a date when I could come to Seoul and teach. A few months later I did go to Seoul and taught at the School. After five days of teaching, I received many invitations to come back to teach again. That was seven years ago, and since then I have traveled to South Korea several times each year to minister in churches and YWAM schools throughout the country.

This also opened the door to China for me and I have made several trips into Beijing, teaching and ministering at the Korean 21st Century Church.