"And let us consider one another to provoke unto love and to good works: Not forsaking the assembling of ourselves together, as the manner of some is; but exhorting one another: and so much the more, as ye see the day approaching." (Hebrews 10:25)

Over the past seven years, I have had the privilege of ministering in many cities in S. Korea; in traditional Churches, at YWAM bases, in coffee shops, restaurants and Retreat Centres, but more recently I have had several invitations to visit ‘house churches’.  And the first three days of this trip were spent enjoying the Presence of Holy Spirit and one another in the house church setting. It is in these more intimate settings that we have the time and opportunity to listen to one another, to ask hard questions and to share more deeply.

In many parts of the world, home churches have become the only safe option for believers to meet.  For instance, the official number of Christians in China is about 15 million however the true number of Christians, worshiping secretly in homes, may be closer to 100 million. 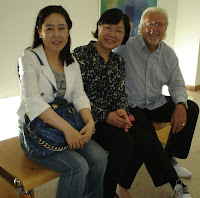 House churches were, of course, the way it all started. Christianity began with a group of a dozen men along a seaside in Galilee. Even later as Paul traveled and planted, it was the intimacy of home fellowships that provided the earliest forums for the Gospel. His sermons in the synagogues and on Mars Hill were but an invitation. The deeper teaching was taking place in small groups in homes and on hillsides. While the facilities and formalities of Sunday services have since become the norm for many, it was not always so.  Philemon, Nymphas, and Aquila and Priscilla all had churches in their houses (Phm 1:2, Col 4:15, 1 Cor 16:19; Rom 16:5).

LCS leader, Mrs. Lee arranged for the latter part of my visit.  Mrs. Lee is a very gifted leader and has trained up over 30 group leaders for the school. And I was invited to do a 3 day ‘Beyond Freedom’ seminar for the students there. 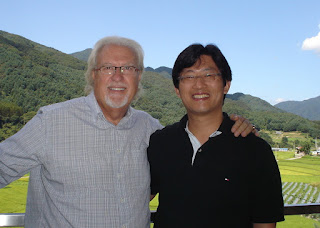 Following that, we drove up to a Prayer Mountain Retreat called Pilgrim House where we taught on embracing the Love of the Father, which in turn draws us into an intimate relationship with God.  The message was very well received and the tangible Presence of Holy Spirit welcomed.

Coming home was a little exhausting as the first flight I was on was cancelled due to hydraulic system problems with the aircraft, however as Jan always tells me - better a cancelled flight and repair than the alternative!  After  7 hours of delays and being transferred to a Hotel until the next morning, I finally arrived in Kelowna a day late.  Tired but satisfied that the Lord was gracious with His power for the seven days I had for ministry in Seoul.
South Korea