S. Korea - He has provided a home away from home!

January 01, 2011
Six years ago, I heard the Lord speak to me about S. Korea. (see details under prophecy) I understood that He would open some doors for me to minister there, but I wasn’t expecting that He would provide me with such competent translators, new friendships, an understanding and love of the culture, a digestive system that would thrive with Korean food, and so many people who would look out for my well-being!

It was colder than I anticipated this time in Korea, and my ministry schedule, hectic. And before you know it, I was gifted with three magnificent scarves to keep me warm and a supply of fresh fruit and vitamin C to keep me healthy! Sometimes I become overwhelmed with the thoughtfulness of these people towards me. 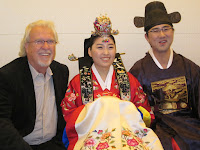 I am learning to hold loosely, the daily schedule as the ebb and flow of ministry here can be unpredictable, with the exception of meal times which somehow seem to stay on track! One day I was invited to have photos taken with the bride and groom at a traditional Korean wedding following the sessions. That evening I had dinner at the very posh Marco Polo restaurant on the 52nd floor of the Trade building followed by lunch the next day at very modest café, enjoying chilli hot sauce poured over rice and mushrooms accompanied with fish soup. But no matter where they take me, the hospitality remains outstanding and the tables full of excited chatter!

For this trip, I was teaching at a BEDTS (Business Eagles Discipleship Training School) as well as hosting two Beyond Freedom Weekend Seminars. With the N. Korean skirmish so fresh, I was anticipating much smaller attendance, but was surprised to discover that over 367 were registered for the Seminars. A Beyond Freedom Seminar of that size presents several challenges without the help of a huge team; however, Holy Spirit was not in any way reluctant to move in power! During the session on deliverance, bitter-root judgements and rejection, over 100 people came forward manifesting demons. It was an amazing sight to see so many leaders laid out on the floor, being healed and set free by Holy Spirit!


There were powerful times of healing as well, but one of the most unusual was for a woman who was going through an extended time of deliverance. That evening she had a dream that a worm poked his head out of a hole in her stomach…..it had a cute face. She began pulling it out but it was very slippery. She called her Mother to come and help. In the dream, together they got the entire worm out and bundled up it was the size of a large grapefruit. The next day in class she received prayer and immediately fell over. All the pain in her left side that had plagued her for 20 years was completely gone. I am telling you this, not to sensationalize a somewhat weird happening, but to give glory to the One who ‘speaks (and heals), now one way, now another, though man may not perceive it!’

There were many other signs, wonders, healings and miracles, and over and over I heard testimonies from people who had never been touched by Holy Spirit in such a powerful and life changing way. Many testified to being healed from the pain and symptoms of different ailments and injuries, including arthritis, endometriosis, curvature of the neck and back, nerve damage, and asthma and each one tested for movement or doing something they were not able to before. I always encourage people to have the healing confirmed by their physician as a testimony to their Doctor as well!

During the last part of my stay, I discovered myself locked out of my guest house. It was well past midnight, my driver had long since disappeared down the road and I was getting really cold. I chattered while walking down the road towards Starbucks,  hoping to get warm, and thinking that I could connect with my translator on the internet to come and help me. (By this time, I realized that I was without my wallet or id and couldn’t even pay for a coffee let alone rent a hotel room.) So I was excited to find a police station on the way, however no one there spoke a word of English! Thank you Jesus that I am an artist and I was able to explain via pen and ink that I was a Pastor from Canada who was locked out of his guest house…..no kidding! Once they understood, I was driven back to the guest house where the manager was able to pick the lock! (Which I didn’t find all that comforting!) 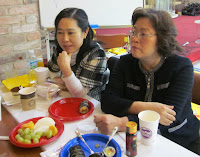 On my last visit with Seung-sil she said that she has been leading BEDTS Staff Conferences for 14 years and this was the most excellent. I was surprised to hear that, but she was very sincere...so I was encouraged. Holy Spirit is on the move in S. Korea!!!!
South Korea